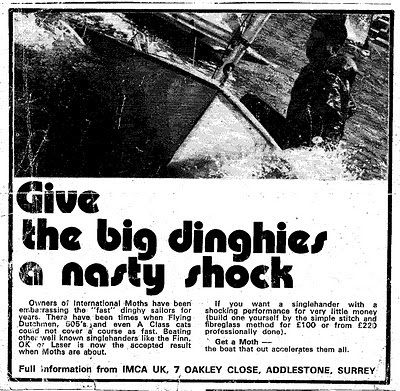 After the latest low-riding event in Rye, I got to thinking about the old days. Then today while clearing out some old files I came across a couple of clippings from an old (very old?!?) Yachts and Yachting.  Year was probably in the mid 70's, a time when I had built a Stockholm Sprite and a Mistral. I was attracted to the Mistral because of its advertised ability to effectively carry heavier helm (14 stone.) 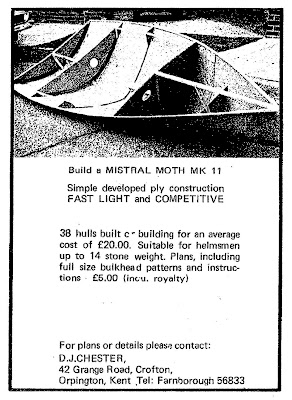 Yep, I'm a dyed in the wool home-builder.  Those sailing production boats might never know the joy of flying your own creation...unless you're John, Amac or Cookie.
Posted by Joe Bousquet at 6:42 PM No comments:

Well, I've finally caught my breath long enough to post about last weekend's HPDO. Yes, after some long nights I did manage to sleeve and repair the rear rack bar and drive up to make the regatta. The weekend saw light breezes, except for a bit before the first race Saturday, and after the last race on Sunday (go figure...)  All the racing was held in low-riding conditions, and some in near windless drifting just fast enough to counter the tidal current.

Results are here:http://www.yachtscoring.com/emenu.cfm?eID=478  Peter won and I finished 2nd. If I didn't have a breakdown prior to Sunday's two hour delayed start, I probably would have won, but Peter again showed the ability to string together finishes with non-lettered scores, even though he did get a TLE in the first race. The conditions were challenging for the RC as well, with a large sailing yacht drifting into the anchored RC boat mid-way through Saturday's last race causing the finish to be moved to the weather mark (and sending folks who didn't score the finish as per the rules: always finish from the direction of the last mark.) I had thought the old "button-hook" finish was well by the wayside, but not according to the folks who were recording the placings. At any rate, it didn't affect the final results.

Both Matt and Anthony bailed on Sunday's racing (Anthony literally when finding water incursion after Saturday's low-riding) leaving the 2nd day's competition to Peter, me, Bill and Spencer.  I thought I'd be smart and use a wooden rudder sans horizontal for the light winds on Sunday. Actually, it worked fine for the three hours we spent waiting for the first gun only to have a G10 gudgeon shear off thirty seconds before the start. I was towed in by Dave Ellis (former sailing master of St. Pete YC and the founder of the classic moth mid-winters series.) I did manage to make the next race with the original rudder. I'll probably re-build the wooden one with a beefier gudgeon for use in the future. 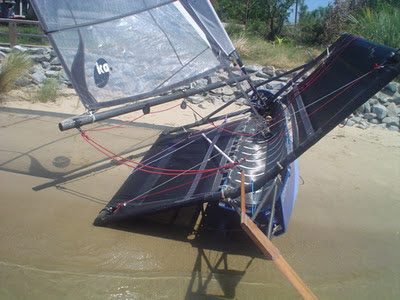 Overall, the event was fun. The hospitality by Peter and Adrianne was outstanding. The dinner Saturday night was scrumptious (and I won a $50 gift certificate to APS for my story-telling.) The beer by Heineken was plentiful and cold. The photography by Photoboat.com resulted in some great shots (primarily of Matt before the racing on Saturday.) The drive was long (and not something a 57 year old guy should pull off by himself,) but won't stop me from attending next year.

And contrary to Matt's opinion as he was watching me low-riding faster and deeper than he could, I don't think it was because of the design of the Hungry Beaver as a "fat bottomed girl" but rather because of the tucked pin-tail that my boat has. Bill Beaver based his Hungry Beaver on Mark Thorpe's Hungry Tiger, the last low rider to win a worlds. So maybe the BR, the M2, and the Assassin all have more transom drag in low-riding conditions.  So here's to Queen and Emma's original Fat Bottomed Girl. 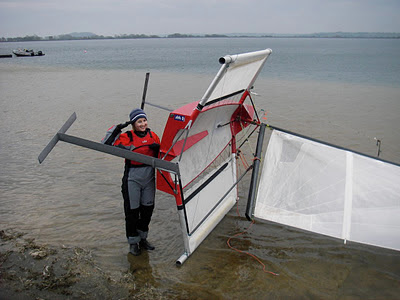 Posted by Joe Bousquet at 11:39 AM No comments: 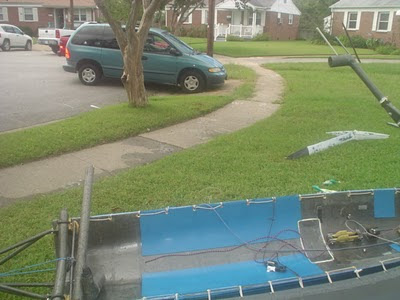 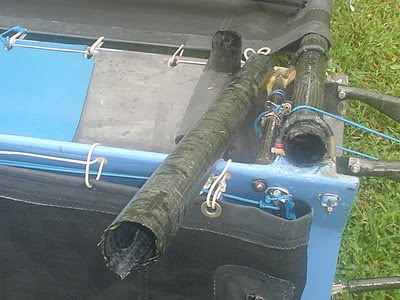 I guess it had to happen sooner or later. Once the foil issue is completely sorted, and the gantry is made bulletproof, and the tramps are re-sewn, then the next weakest part has to give. My rear wingbar gave out sailing in an ocean regatta where there were 4 foot seas and 10-20 knots of wind. Luckily a rescue r.i.b. got me back to shore. I'll attempt to sleeve the pieces but my best guess is that I'll need another tube custom made.

I'm not sure why it broke. The rear cheese slicer may have been too tight. I had just reinstalled the rack to put on the resewn tramps and may have tightened down on the U-bolt a bit too much, although I realize it only serves to hold the rack and hull together.  I also may have introduced some stress cracks by pounding on the tube with a rubber mallet the last time I disassembled it. At any rate it looks like the HPDO is a bust again this year.

I'll continue to gaze at the picture of a glory moment taken two years ago by the Photoboat folks. To all those sailing this year, I hope the conditions are just as good. 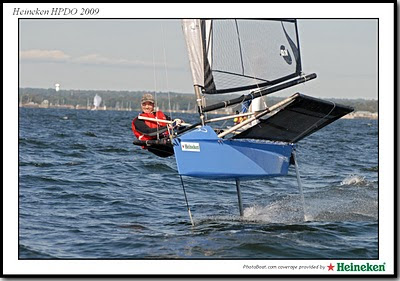