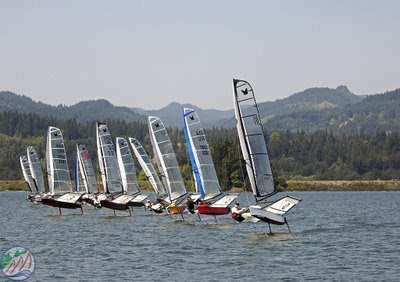 Photo above by Sean Trew at Pacific Fog Photos.

Wind all over the compass until after the time limit to start the last race. No racing Sunday so the results from yesterday stand. Top three are Bora, Si, Hans.

Here's a very nice wrap up from Charlie McKee:

It is hard to put into words the positive energy and enthusiasm in the US Moth fleet right now. 18 boats gathered at Cascade Locks, 16 of them racing in the regatta held at the site of the 2009 Moth World Championships. Considering that the first moth regatta in the US in many years happened only 5 months ago and had 6 boats, the growth has been explosive and shows no signs of abating. Many of the competitors have only had their Moth's for a few weeks or months, and the learning curve was steep. While the regatta itself was sailed in predominantly light to moderate conditions, the pre (and post) regatta sailing featured some "classic Gorge" sailing in flat water and 15-22 knots winds from both the west and east.

The US fleet was graced with the presence of former World Champ Simon Payne from the UK, who flew in and sailed a brand new Prowler loaned to him by Tom Driscoll, and also by former World Champ and Bladerider guru Rohan Veal, who stopped by for a few days to lend a hand and check out the scene. But the star of the show was Detroit's Bora Gulari, who put on a truly dominating performance to win the regatta with 9 straight 1st place finishes. Sometimes behind, sometimes under pressure after a few miscues or when Rohan stepped into a boat for a race, Bora always came through in the end. His boat was flying high, perfectly tuned, and smoothly sailed in all conditions. While some competitors could keep up with Bora downwind or upwind in the light, his upwind speed when overpowered was crushing. It was an eye-opening and awe inspiring reminder to the fleet just how there is to go still.

Simon sailed well but had a somewhat inconsistent series to finish 2nd. The rapidly expanding Pacific NW fleet was well represented with 7 boats, with Seattle's Dalton Bergan and Gorge local Morgan Larson (showing up for the regatta with only a few days of Moth sailing under his belt) particularly impressive. But the most impressive performance aside from Bora was undoubtedly 16 year old Hans Henken, who finished in 3rd place behind Bora and Simon. Good starts and tactics, solid boathandling, and excellent downwind speed put him on the podium for the 2nd time in a month, following his bronze medal in the World Youth Champs in the 29er Class. George Peet ended up 4th (with very impressive performance in the strong winds before the regatta), with Dalton Bergan finishing 5th.

Although the regatta itself did not make the most of the wind that was available, there were still 9 races over the first 2 days (and several more unofficial races after sailing had been abandoned on sunday). For a first view by the Moth Class of next year's Worlds site, the regatta was a great success. For the week as a whole all 7 days saw foilable wind. 6 of the 7 days had part of the day 15-22 knots and part of the day 7-15 knots. In spite of the unseasonably hot weather (100 + degrees) Cascade Locks proved itself as the most reliable sailing conditions in the Gorge, with 2 days of beautiful easterlies while most of the river wallowed in little or no wind. The fleet is very excited to welcome the rest of the world to Cascade Locks in 2009 for what should prove to be a spectacular showcase for the resurgent Moth Class.