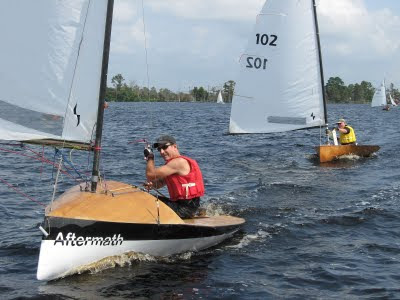 Last weekend I competed in the Classic Moth National championship sailed in Elizabeth City, North Carolina. I sailed my wife's boat, Aftermath, a mid-'60s Shelley that I modified by raising the sheer and building a huge foredeck. Last year I finished second in the same boat to Jeff Linton. This year Jeff was tied up with the Lightning Worlds so didn't compete. This year's winner was Mike Parsons from the Philly area. Second was Annapolis's John Zseleczky. I finished third. 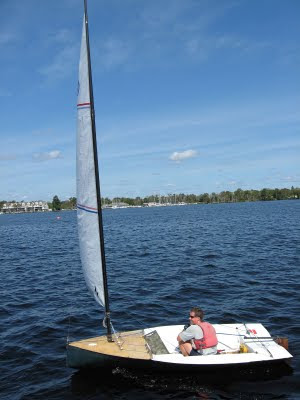 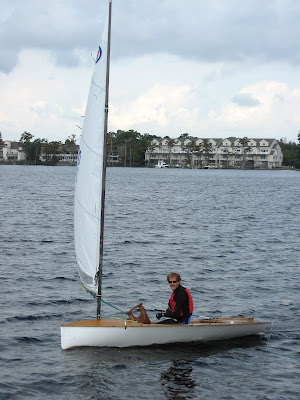 It's interesting that the three of us also have built foilers. Maybe we just like building stuff, but probably it's that we want to try new stuff, even if we aren't very good at it. In the Classics, Mike pulled off the win after many years of plugging away. The boat he sailed was his third home build, a mistral that he built with an unstayed rig that cants forward quite a bit off the wind. (Both John and I use conventional stayed rigs.) One ingredient of Mike's success is that he has consistently campaigned his boat up and down the east coast, proving once again that time in the boat can make a huge difference. My klutzy boat handling included falling off the boat one race when rounding the leeward mark in the lead, and completely blowing the start of another race.

My foiler is yet to be put together, but I have registered for the Heineken High Performance Dinghy Open to be sailed in a couple of weeks in Rye, NY (about a 9 hour drive.) John Ilett says he's shipping me a replacement main foil so I should be set-up okay if I can repair my rudder gantry. Stay tuned for more details. In the meantime I'm really busy at work (and can hardly justify writing the post) but am lurking in the Mothosphere. Pictures above by Ingrid and Elisabeth Albaugh.