I've been doing a whole lot more sailing than blogging so here's a consolidated report. 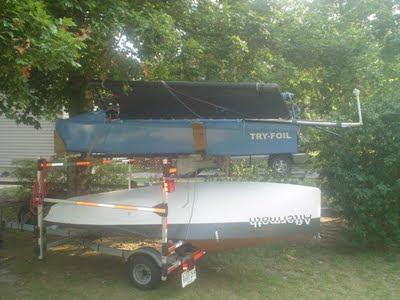 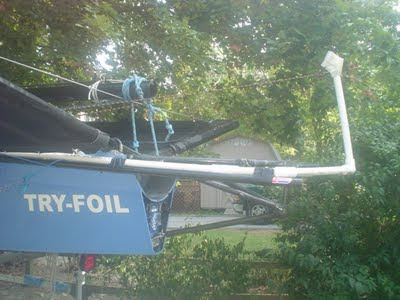 With the Harbor Springs regatta off the schedule, I wanted a chance to sail in fresh water so Susan an I loaded up the boats and headed about an hour and a half south to the Chowan River in North Carolina.  The pictures above shows the foiler and Susan's classic on the trailer and a close up of the Squirrel-cam arrangement.  Over two days they wasn't a lot of wind but I did manage to get airborne for about an hour each day.  Snippets of the video recorded on the first day are below. It's fun being able to sail in a bathing suit and not worry about jellyfish. The freedom without the constraint of the wetsuit made my movements aboard much more graceful. Only 19.5 knots max, but fine in the moderate conditions.

The second day I took off the camera mount and placed the Velocitek forward where I could see it. What a difference!  Being able to view the boat speed through the jibes made three is a row possible. Maybe there is hope!


After returning from North Carolina it was back in the salt waters of Willoughby Bay. I started to play with the Velocitek's ability to download tracks. One session is shown below. The speed statistics include some anomalous readings - max of over 32 knots and a average of over 27 kts. You can be sure that they are not real! 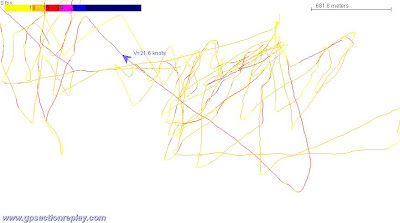 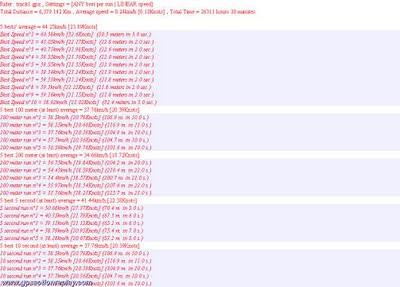 I've also been trying to hit the weather window just right to get nice conditions. One day last week I launched at 9:30 and got the best two hours of the day. I like the website that provided this display. It also has the ability to display forecast conditions for the next few hours. During the summertime it's a question of whether the seabreeze will overcome the pressure gradient or not... 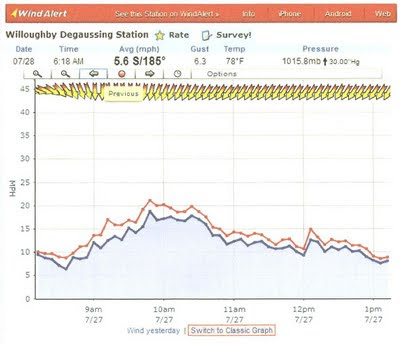 One day I tried another camera mount. The wind started marginal then continued to drop out. The most excitement was watching a least tern dive bomb a seagull. I wonder what was the cause of the tern's consternation?
On the racing side, I competed in a regatta on July 30 at ODU. The handicap fleet had just a handful of boats and they scored me using a Portsmouth number of 65 (my recommendation.) While the breeze was up as we were launching it dropped throughout the day. Needless to say I couldn't sail to the rating and finished out of the money. It was useful to have timed starts, mark roundings, figuring laylines, etc.  There was another race at Ware River the following week and I'll have a separate post for that.
Posted by Joe Bousquet at 10:32 AM No comments:

Two days ago the rudder's horizontal got a little loose so yesterday was spent reattaching it with a bigger  1/4"-20 bolt and some WEST System Six-10 adhesive. Today I hit the water again and ended up with a broken pushrod. The pain in the neck is that the piece that broke is the 10-32 left hand thread I use for the ride height adjuster. So it's another quickie order to McMaster in Chicago for a couple of bolts (one to replace the broken piece and a second for a spare.)  I did manage to collect a new piece of video with the speed readout much clearer. The breeze was less than Thursday and my top speed was almost as great. I've added some subtitles and music. Enjoy. I still gotta work on the jibes and remember to attach the tiller centering bungee...

The beginnings of a long set of tweaks

For the past week I've been sailing Try-Foil with her new gantry and new M2 mainfoil. These sessions have been the first since last year's debacle at Harbor Springs. The initial settings on the strut and rudder angles were my best guess. I've been tweaking the mainfoil's AoA and have been pushing the boat hard upping my highest recorded speed (as of today it stands at 23.3 kts.) I've also installed a GoPro camera and have taken some interesting video.

My first attempt (sans music) is a sorta homage to the moth pioneer videographers, including my version of the Squirrel-cam, the under-the-transom Bora-cam, and a nod to Gui's North Cacalaki road trip.


The next outing will have the Velocitek much closer to easily read the speed. And even though the turbid water of Willoughby Bay is my home pond, is it any wonder why I'm eager to sail again in the crystal clear water of Lake Michigan up at Harbor Springs?
Posted by Joe Bousquet at 6:39 PM No comments: