Last weekend I sailed my wife's classic in a handicap race, the Hampton Roads Sunfish Challenge and Dinghy Distance Race, a 8 mile point-to-point race in the Norfolk Harbor. The course was just about all to windward, fighting a ebb tide of about a knot, in breezes of 10-15 knots. I finished in a little less than two hours, easily correcting over a Hampton One Design, a 470, a Taser, a 29er, a JY15, a Snipe, and some other assorted dinghies.  The scoring was based on the US Sailing published Portsmouth Yardstick which has the moth (classic rules: 1965 vintage, 72 sq ft, etc.) at 107.1 (comparable to a Penguin at 111.5).  There was no way I could lose. In fact, I beat all but one of the lasers and one of the sunfish in the water and they started 5 and 10 minutes ahead of me respectively. They were scored separately as one design fleets and didn't need the handicap, but it's interesting to note their numbers are 91.1 and 99.6.  I know that US Sailing depends on clubs sending in elapsed time reports to adjust Portsmouth numbers, but for a development class such as a moth, it's almost impossible to get one number that works. The 107.1 rating is probably based on results of sundry moths sailing in pick-up fleets. Probably, the boats are old and worn and the helms are not those actively racing in the Classic Moth Boat Association. The classic moths have gotten faster and faster as hulls, sails, rigs and centerboard shapes and sizes have been put under the development pressure of CMBA competition. The fact that the top sailors racing classics are also very good dinghy sailors (including Jeff Linton, the US Sailing Rolex Yachtsman of the Year in 2008) have really spurred development. We routinely outsail Lasers when head to head.
So how would someone handicap a foiler?  Below is a pic taken by Ed Salva a couple of weeks ago at Elizabeth City after the racing of the classic moth nationals. John Zseleczky is foiling past Mike Parsons (who finished 2nd in the Nationals in his Mistral behind Jeff Linton in his Mousetrap design).  The Mistral seems to be the typeform of the fastest hull: narrow waterline, full beam out to 60". The CMBA bars wings with a concavity rule. 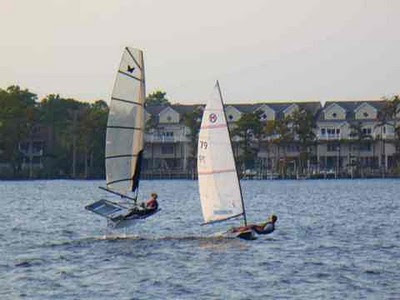 So here's the question for the day:  How should a well sorted foiler be rated? Obviously, different numbers for foiling and non-foiling conditions. The  RYA pegs the moth at 98 (non-foiling) and 69 (foiling.) My guess is the non-foiling is about right but the foiling number should be lower, maybe around 60. Below are some numbers to consider, comparing USSailing and RYA numbers for identical classes. In most cases, the British data indicates that boats sailing in handicap starts are slower than their US counterparts. USSailing fails to list the International Moth at all, only the "classic" moth at a too high 107.1 (the reason I won the race.)


Anybody else want to take a shot?
Posted by Joe Bousquet at 5:41 PM 2 comments: 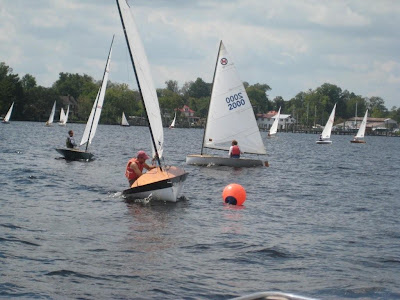 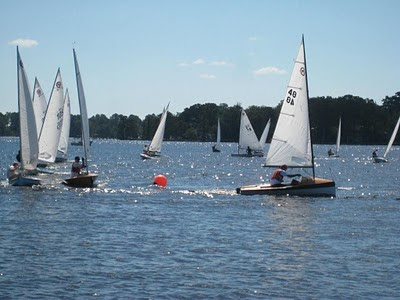 ﻿
Last weekend was the Classic Moth National Championship in Elizabeth City, NC, "The home of the mothboat." I was racing Aftermath, my wife's modified Shelley and finished 6th. Jeff Linton won the regatta, hosted by the Classic Moth Boat Association, besting Mike Parsons and Mark Saunders.  Elizabeth City is an interesting venue. Fresh water with little to no current, a nice grassy lawn (the home of John and Sarah Pugh) to rig up on, and a floating dock that allows launching into four feet of water.
The town is small and dotes on the itinerate sailor: the municipal marina is a stopover on the intercoastal waterway and the local chamber of commerce has adopted the moniker "the Harbor of Hospitality," complete with a logo of a classic moth on the town's water tank. 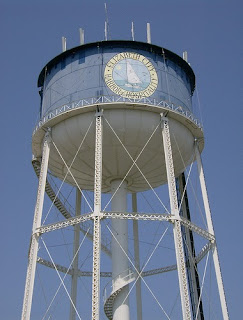 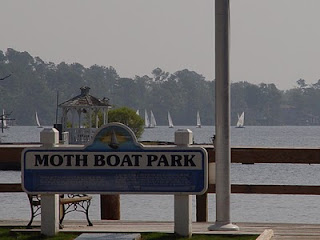 The two days of racing was very pleasant even though I was off the pace of the leaders (I only won one race and my average finish position was 5th.) The local newspaper put together a nice slide show linked here.

More interesting was the after race activities on Saturday: both Mike Parsons and John  Zscleczky brought down their homebuilt foilers. John's Hungry Beaver is pretty well sorted - the only obvious glitch was his fixed gantry was not angled enough to provide sufficient rudder lift. Even cranking the worm gear to its maximum extent the ride was still bow up. John says his plan is to remove and shim his rudder horizontal to help get more lift. 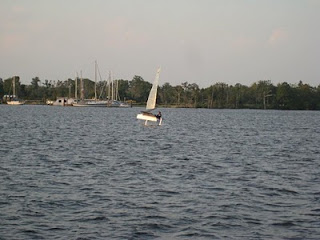 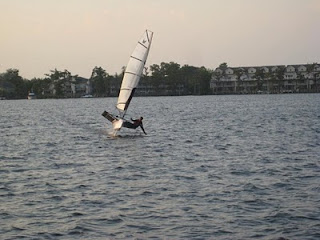 Mike's Stevo is still a work in progress. Sailing it reminded me of my boat two years ago: the hull, rack, and rig are sound but the foils and foil control systems still need lots of work. The obvious problem was high flights often resulting on sudden crashes. We tweaked the morse cable lengths and played with the wand settings but still couldn't get stable flight. The fact that the breeze was around 10 kts didn't help (perhaps in more wind things would have been better.)
John and I will be sailing in a couple of weeks at the  HHPDO in Rye, NY. John in his Hungry Beaver; I will be in a borrowed Bladerider.
Posted by Joe Bousquet at 8:21 AM No comments:

How can a young sailor on his or her own (not living with the 'rents) afford to sail in the upcoming world championships? I know even for me, a fifty something professional, trying to procure a $10 million liability policy would be a challenge. I'm pretty sure it's not something a twenty something sailor in the USA would be able to pick up. What magic in Australia allows such a policy to be written?

Movie Videos & Movie Scenes at MOVIECLIPS.com
Posted by Joe Bousquet at 8:34 AM 4 comments:

I've resisted the facebook/twitter/social media phenomena until now, but with Richard's prompt as a way to increase communication among the US mothies, I've joined. We'll have to see if it's useful or a waste of time. I don't expect to do a lot of "chatting" or otherwise friending and being friended, except for moth related activities.

Now, back to finishing up gantry #3. The Classic moth nationals are next week and I hope to bring Try-Foil as a play/demo toy before and after the racing. It was three years ago next week that I first tried Bill's boat and was smitten, as described here.
Posted by Joe Bousquet at 9:02 AM 2 comments: