With apologies to Zallinger's "March of Progress" and the WRYC T-shirt artist, I offer the next step: 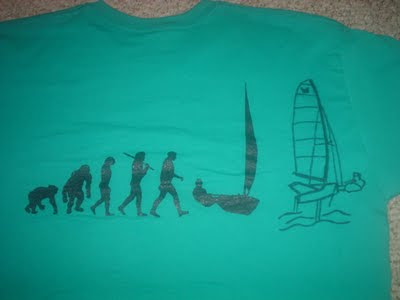 August 6th and 7th saw five moths meet for the annual Ware River Governor's cup regatta. It was the largest gathering of moths in the middle Atlantic area to date.

The breeze was up on Saturday (topping off in the mid 20s with big waves) and we only got in 2 races with some attendant carnage. I won and Bill Beaver took second. Gui Vernieres, John Zseleczky and Mike Parsons rounded out the fleet.

After Saturday's second race Bill heard a crack on his strut during a capsize and decided to end-for-end the strut hoping to save the foil. The top (or then the bottom) still decided to part ways while sailing back in. Needless to say he didn't sail Sunday but will surely add to the carnage album. 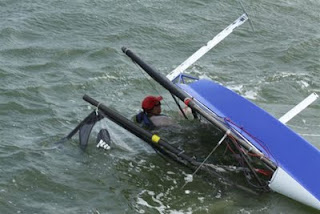 With Saturday's big breeze, Mike launched and shortly returned to shore figuring that discretion is better than having to repair various bits and pieces. Gui was pleased having a fairly long session in some wind and having nothing break. Neither John nor I had equipment problems, except for the loose nuts at the end of the tillers. We all agreed that whoever managed the offwind legs the best would end up on top. Gui, having his sailboard to play on after Saturday's racing, estimated the puffs in the upper twenties (he was using his 6.5 sqm sail.) The waves on the 2nd race were larger than anything I experienced at Weymouth or at the Gorge -- maybe 2.5-3 ft max. We figured the southeast wind had a fetch of about 20 miles rolling in from the mouth of the Chesapeake.

Sunday dawned with still some breeze left over but it had veered to provide flat water. But by the time we got to the starting area it had dropped to sometimes marginal foiling conditions. Lin McCarthy on the RC boat got a nice shot of Gui during one flyby. 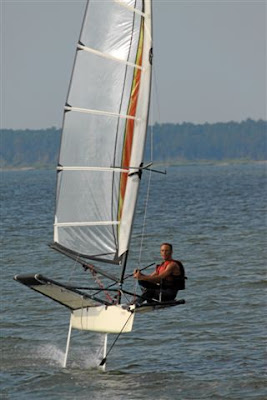 Since there were nine classes to grind through the sausage making starting sequence, we decided to bail out and just have some self-started races up to a mark and back. Sunday's sailing was fun even if it didn't count. We got lots of comments, especially from the junior Opti sailors.

I edited a video of the first race and am working on the second tonight. Still pics as I get them. The full set from Lin McCarthy is on the Yahoo! site