Congrats to Arnaud on winning the European Champs. This post, however is focusing those that finish just out of the trophies. Rod Harris, that means you (and me...). Score sheets tend to evaporate over time (although now with their web existence they may hang around longer than they used to.) Trophies, on the other hand, stay around longer than you may want (how many folks have used old Jefferson cup trophies to mix resin in?) 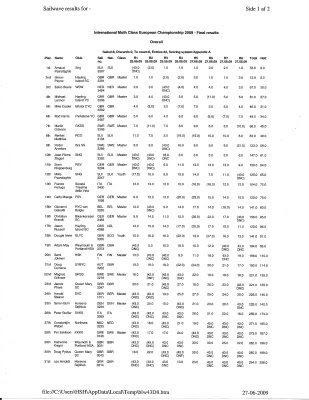 I managed to find score sheets from the 1974 and 1975 US Nationals. Note who finished just out of the top five each year. So while some folks departed the regatta with a trophy for their efforts, I left each year thinking "If I had only...". The nationals in 1974 were especially tough - in my first major moth regatta I missed placing by three tenths of a point (does anybody still use the old Olympic Scoring System?). The 1975 Nationals found me five points out of the money. 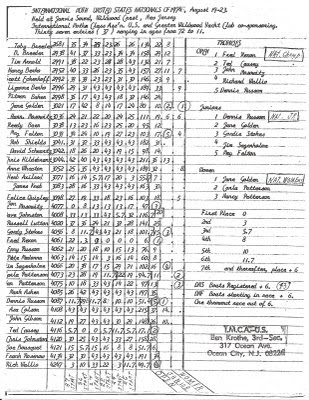 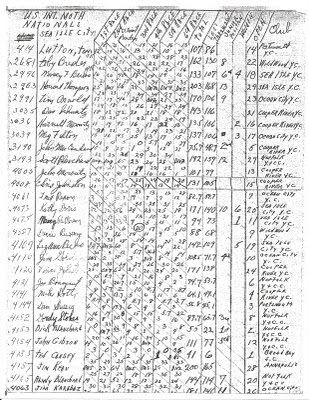 One of my duties in organizing the 1976 Worlds was to procure the trophies. I had figured out that since finishing sixth was my lot in life, I'd order six trophies. The ironic thing was that I finished seventh. And ironies of ironies, when I competed at the Hayling Island worlds in 1977, they were fifteen open place trophies. I couldn't find a score sheet in the IMCA-UK archives, but take my word for it: I finished sixteenth. So Rod, hold onto the memories of this year's Europeans. Save the pdf file of the scoresheet. And be thankful that you don't have one more trophy cluttering up the mantle piece. I've been there and done that.

Great blog entry!
Enjoyed the reading as an "also ran". But deep down in the fleet and a first timer in a Moth Euro contest.