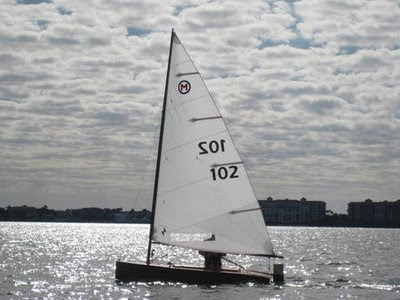 The results are in from last weekend's classic moth midwinter championship sailed out of Gulfport YC just west of Tampa. Jeff Linton, pictured above, won, followed by Mark Saunders. Even though I wasn't able to make the trip this year, two of my boats were sailed. Greg Duncan competed in a modified woden Europe renamed "Gypsy," pictured below. For that rebuild I installed a new well and built a humpy deck to accept a deck stepped stayed mast. The huge camber was to affect a raised boom, since at the time there was a rule restricting the height of the boom above the deck to a maximum of 12 inches. 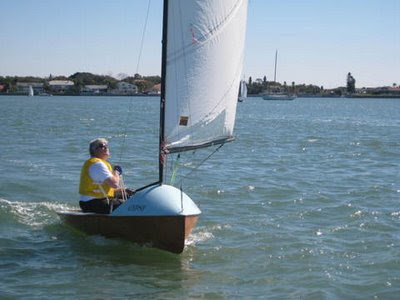 My other boat that was sailing at the Midwinters was a modifed Skol design (a production International moth from the 1960's era.) That particular rebuild is documented here.

The photos above are by Len Parker. The YouTube link below is a slide show by Rod Mincher. Enjoy.