I drove to Lynchburg and back yesterday for an educator recognition dinner so didn't get a chance to work on the boat. Except on the way to Lynchburg I drove through Farmville, a small town in South Central Virginia, and had an opportunity to to reminisce 34 years earlier about another moth caper. Richard Wallio and I were looking for some small diameter aluminum irrigation tubing to make a boom. The idea was to cut it to length, then flatten it to an oval section by laying the 2" diameter tube on the driveway, covering it with a sheet of plywood, and then running over it slowly with a car. I believe it was such a section that I used on my boat Try-Umph at the Hayling Island Worlds in '77. Anyway, I dropped in again at Mid-Atlantic Irrigation Co and wandered about the yard. In the way back was a rack of used tubing, just the right size for a male mandrel to lay up a carbon hiking stick. So I again bought some aluminum from the same outfit. I wonder if they (or I) will still be around in 2043 to meet my moth material requirements. 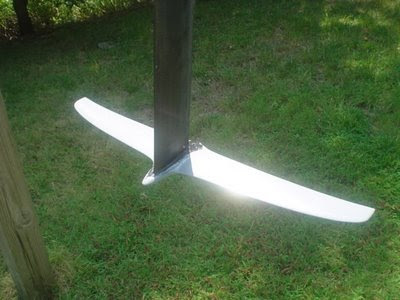 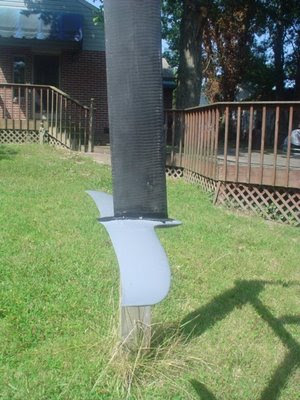 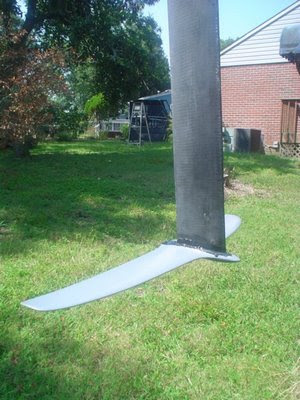 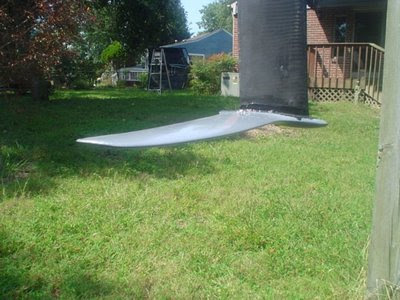 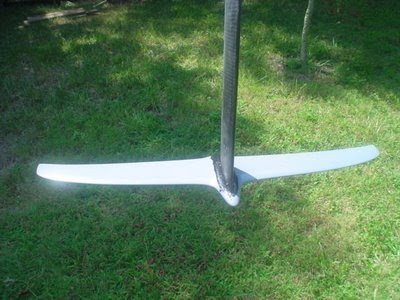 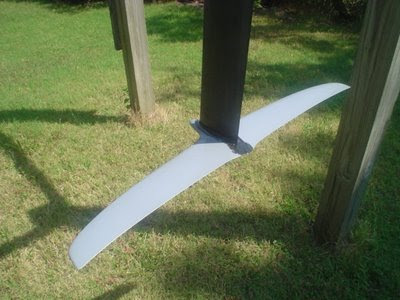 About 4:30 yesterday afternoon the UPS guy delivered my new rudder horizontal that Bora made. So this morning it was shape the tang on my recently built strut, fill the socket with some goop, and hang it in the sun to kick. This afternoon I should be able to pop it off then start the finish sanding. Bora describes the foil as "slippery." It's similar in planform to the M2 rudder foil, shown on their website and included below. 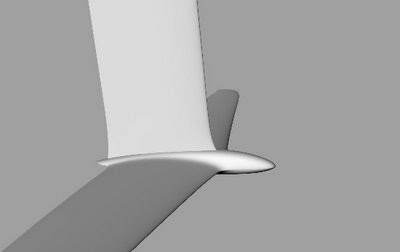 So now I have two new lifting surfaces. I may be able to get in one last sail tomorrow. This wait-til-the-last-minute-to-finish-building-the-boat routine is also reminiscent of Richard's tendency to do the same. There was more than one regatta where he was heading to the start area with the varnish on the foredeck not fully cured... As for me, it's too late to do anything else. I have to take the boat apart tomorrow and crate it.

Stayed in bed all morning just to pass the time
There's something wrong here, there can be no denying
One of us is changing, or maybe we've stopped trying

And it's too late, baby, now it's too late
Though we really did try to make it
Something inside has died and I can't hide
And I just can't fake it

It used to be so easy living here with you
You were light and breezy and I knew just what to do
Now you look so unhappy, and I feel like a fool

And it's too late, baby, now it's too late
Though we really did try to make it
Something inside has died and I can't hide
And I just can't fake it

There'll be good times again for me and you
But we just can't stay together, don't you feel it too
Still I'm glad for what we had, and how I once loved you

But it's too late, baby, it's too late
Though we really did try to make it
Something inside has died and I can't hide
Posted by Joe Bousquet at 11:05 AM

Has a Bieker look about it; looks a lot like his I14 rudders.

WOW, I like it. I reckin' I'm going to have to build a "Fat Boy" foiler for us 200 plus pounders. Oh BTY I have 4 old Navy 420s in the yard been using them for our youth sailing. Nice boats. Have a good trip, want stories at the Classic Nats. Greg

It is a bieker designed foil. To my eye it does not seem like there is enough aoa to keep the boat in the water but that is a total guess