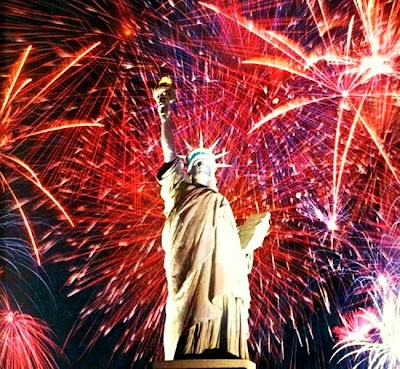 Since foreigners now outnumber the Americans in the registration list, I thought I educate some of the non-natives (including Nige, our class president.) Most everybody should know of the first two paragraphs of the Declaration of Independence:

The Unanimous Declaration of the Thirteen United States of America

When, in the course of human events, it becomes necessary for one people to dissolve the political bonds which have connected them with another, and to assume among the powers of the earth, the separate and equal station to which the laws of nature and of nature's God entitle them, a decent respect to the opinions of mankind requires that they should declare the causes which impel them to the separation.

We hold these truths to be self-evident, that all men are created equal, that they are endowed by their Creator with certain unalienable rights, that among these are life, liberty and the pursuit of happiness. That to secure these rights, governments are instituted among men, deriving their just powers from the consent of the governed. That whenever any form of government becomes destructive to these ends, it is the right of the people to alter or to abolish it, and to institute new government, laying its foundation on such principles and organizing its powers in such form, as to them shall seem most likely to effect their safety and happiness. Prudence, indeed, will dictate that governments long established should not be changed for light and transient causes; and accordingly all experience hath shown that mankind are more disposed to suffer, while evils are sufferable, than to right themselves by abolishing the forms to which they are accustomed. But when a long train of abuses and usurpations, pursuing invariably the same object evinces a design to reduce them under absolute despotism, it is their right, it is their duty, to throw off such government, and to provide new guards for their future security. --Such has been the patient sufferance of these colonies; and such is now the necessity which constrains them to alter their former systems of government. The history of the present King of Great Britain is a history of repeated injuries and usurpations, all having in direct object the establishment of an absolute tyranny over these states. To prove this, let facts be submitted to a candid world....

What may be unknown are some more arcane Americana:

The Supreme Law of the Land, the US Constitution, was not adopted by the states until September, 1787. It also has a memorable opening (the preamble)

We the People of the United States, in Order to form a more perfect Union, establish Justice, insure domestic Tranquility, provide for the common defence, promote the general Welfare, and secure the Blessings of Liberty to ourselves and our Posterity, do ordain and establish this Constitution for the United States of America....

The flag of the United States has undergone sixteen variations, primarily in the number of stars, from the 13 representing the original 13 colonies, to the present day 50 representing the current 50 states.

The national anthem of the United States, the Star Spangled Banner, was not officially adopted until 1931. Its tune is that of an old British drinking song. Pre-dating The Star Spangled Banner as a de facto anthem was a song titled Hail,Columbia. (Columbia, the river where the world's will be held, is named after the ship Columbia Rediviva, the first western vessel to navigate the tidal portion of the river. Both are referring to "Columbia," a poetic female personification of the United States, popular in the 18th and 19th centuries.) 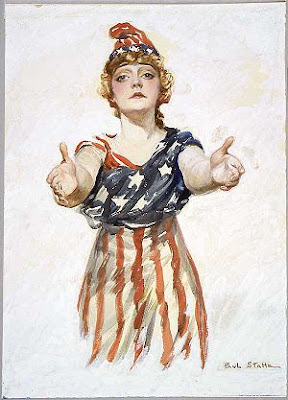 The Statue of Liberty was given to the US by France in 1887 to help celebrate the country's centennial. On the wall of the interior of the statue's pedestal is a bronze plaque with a sonnet by Emma Lazarus titled The New Colossus


Not like the brazen giant of Greek fame,
With conquering limbs astride from land to land;
Here at our sea-washed, sunset gates shall stand
A mighty woman with a torch, whose flame
Is the imprisoned lightning, and her name
Mother of Exiles. From her beacon-hand
Glows world-wide welcome; her mild eyes command
The air-bridged harbor that twin cities frame.
"Keep, ancient lands, your storied pomp!" cries she
With silent lips. "Give me your tired, your poor,
Your huddled masses yearning to breathe free,
The wretched refuse of your teeming shore.
Send these, the homeless, tempest-tossed to me,
I lift my lamp beside the golden door!"

Wiki says that the painting below may have been a source for the pose of Lady Liberty.

While there are many characters that represent aspects of the American Spirit (think cowboy), one of the oldest is Yankee Doodle Dandy. 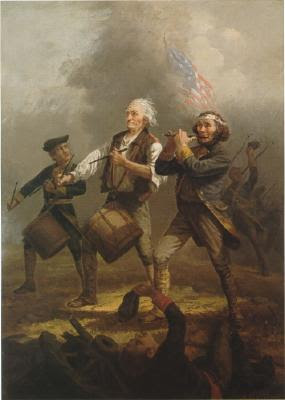