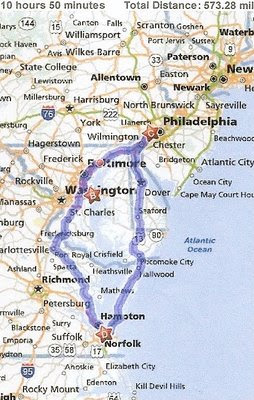 In support of another home builder, I drove ~575 miles to Media, PA and back to drop off John Z's strut mold at Mike Parsons' place outside of Philadelphia. I also dropped by APS in Annapolis to pick up some hardware, so the trip wasn't single purpose. The route basically circled the Chesapeake Bay.

During the twelve hours up and back I realized that if I ended up driving to Oregon, I would have put away dozens of cheeseburgers and gained at least ten pound. As bad as airline food can be, it's almost impossible not to eat fast food when on a road trip. The trip also got me thinking about distance records in moths, in particular fast runs (say over twenty miles or over an hour in one direction.) Back in my foolish youth (1979, I think) I was sailing in the Worrell 1000 Coastwise Race, a 1000 mile race in Hobie 16s from Fort Lauderdale, Florida to Virginia Beach, Virginia. On the leg beginning at Cape Hatteras we had about perfect conditions: the breeze was about 20 knots from the SW (offshore so flat water) and there was a residual swell from the SE providing good surfing waves. The coast runs basically due north. Hobie Alter, Jr was on one of the other teams and had mentioned that he had never had a Hobie 16 go as fast as he had that afternoon (this is from someone who had sailed purpose-designed speed trials in southern California.) We sailed for two or three hours on the edge of pitchpoling, reeling off dozens and dozens of miles as we sprinted north.

Has anybody done something similar on a foiler? I don't mean the 'round the world race in Dubai, but rather a one-way broad reach in lots of breeze for an extended period of time. The mouth of the Chesapeake Bay is a little over 15 miles wide at the Bay Bridge Tunnel, so I have a somewhat close stretch of water. Unfortunately, there's usually lots of waves and current to contend with when the wind is up. MAybe a trip to the Outer Banks is in my future...

One foot on the brake and one on the gas, hey!
Well, there's too much traffic, I can't pass, no!
So I tried my best illegal move
A big black and white come and crushed my groove again!

When I drive that slow, you know it's hard to steer.
And I can't get my car out of second gear.
What used to take two hours now takes all day.
Huh - It took me 16 hours to get to L.A.!

Dubai round the world kicks ass! only problem being that you need a southerly wind to beat any records! so you are more likely to go reaching off into the distance, as we rely heavily on sea breeze here which is always westerly/north westerly
cheers