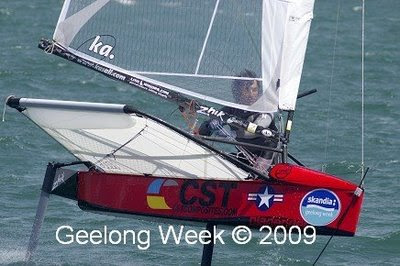 
First of all, congrats to Nathan on his AUS Nationals win. An olympian effort on the part of an Olympian. His placings were consistently near the top, with 8 of his 10 finishes in the top three. I wish I could have a blow-by-blow description of the last race when he finally captured first ahead of Simon.

The strange 0.8 points for first place recalls the old Olympic scoring system (1st place scored 0 points, second place scored 3 points, third place scored 5.7 points, 4th place scored 8 points, 5th place scored 10 points, 6th place scored 11.7 points, and 7th or lower place scored place plus 6 points.) Such was the scoring system in effect in 1977 at the Hayling Island Worlds. My experience at the time was that such a bonus system for top finishes effectively penalized folks with finishes consistently out of the top six and rewarded inconsistency (one or two top finishes would more than compensate for a middle-of-the-fleet finish.) In any event, regardless of the system used, it's hard to beat a competitor who posts drop scores of 7th and 10th as Nathan did. Well done!

It's been fun watching the results come in and reading the commentaries on this championship from Down Under. Maybe some video is soon to be posted?

For those counting, the Gorge Worlds begin in 195 days. Start planning now. I have!

Learn the ABCs with the Jackson Five.
Posted by Joe Bousquet at 11:10 AM

Joe,
Last race: Nathan got squeezed out at the windward end and tacked early, everyone let him go alone and he got a good lift. When the fleet crossed near the 1st mark he had a 50m lead. Not even Dave had the speed to chase him down. Game over.
The 0.8 scores were a round up of the 0.75 for 1st which the aust class has used in the nationals since it was in the ISAF system about 10 years ago, and specified in the SIs.

Thanks for the report. I appreciated your description of the racing. Good Karma to you and your new boat.