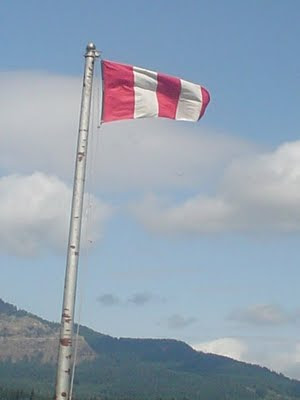 After a short postponement the RC got off three races back to back. The results as posted on the event site have Bora in the lead, just two points ahead of Nathan. The net scores are now meaningful as both throwouts are taken into consideration. Nine points back is Arnaud with Dalton three points behind him. Si is another ten points back.

I managed to muddle around the course for all three races, but the committee only noticed my last start. Maybe I should more sail more conspicuously, but I would think my wild oscillations off the wind would attract lots of attention. At any rate it seemed the story today was to keep things together and avoid breakage. The waves were pretty big and the shifts were large and sudden and I saw lots of folks sticking it both upwind and down. After winning the first race of the day, Scott returned with a broken wing strut. Rough since the two DNCs and his one DNF means he has to carry a lettered score.

My min-rig needed more rake, and my repaired gantry needed more AoA, so tweaking each tomorrow should help. Thanks to all those who are following along. Yesterday's post was picked up by Scuttlebutt and I got an e-mail from Mike Worrell, a name from the past (way past!) I had sailed in three Worrell 1000s (aka the Coastwise Race in Hobie 16s) in the late 1970s. As to my take on Doug's comments about boat colors, how about boat names? My (blue) Try-Foil may be the one hull displaying something that doesn't end in ".com."

To remind me to keep the rightside up, I decided to go back to the well, and include some Queen. Enjoy.

Steve walks warily down the street,
With the brim pulled way down low
Aint no sound but the sound of his feet,
Machine guns ready to go
Are you ready, are you ready for this
Are you hanging on the edge of your seat
Out of the doorway the bullets rip
To the sound of the beat

How do you think Im going to get along,
Without you, when youre gone
You took me for everything that I had,
And kicked me out on my own

Are you happy, are you satisfied
How long can you stand the heat
Out of the doorway the bullets rip
To the sound of the beat