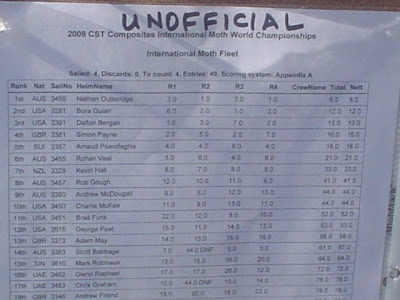 Results for the first four races are above. A link to the official results is here. For the first two races, the conditions were mid teens, with stronger pressure up the left side of the course. Even though the right side has the favorable 2 knot current, it also has bigger waves and seemingly lighter pressure. The best course seems to be staying left of center, but I'll let the leaders give their take on it.

I saw the first weather mark rounding of race 4. Bora had at least a hundred yard lead but got tangled up with the offset mark. By the time he righted the boat and did a circle about 10 folks passed him. He did manage to reel in about seven of them and finished third. 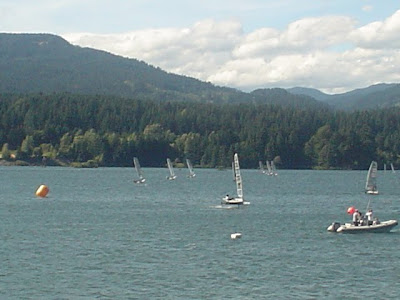 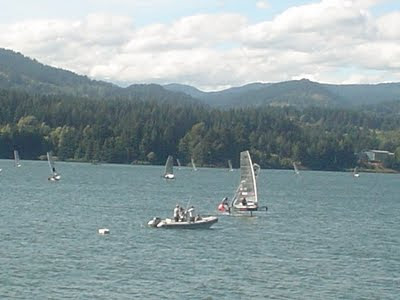 Not to be outdone, Lindsay did the same thing - capsizing on the off set mark (both seemed due to bearing away too quickly at the weather mark, then realizing they were coming in too deep to the offset mark. The resulting luff caused the capsizes.) Above is a pic of Bora's rounding of the weather mark, his subsequent righting and circle, and below is one of Lindsay who got really intimate with the offset mark - when she righted her boat the mark came aboard!) She's currently sitting 31st, just one place out of Bruce's "top thirty" - anyone of which could be considered a good showing, given the talent and depth of the fleet. 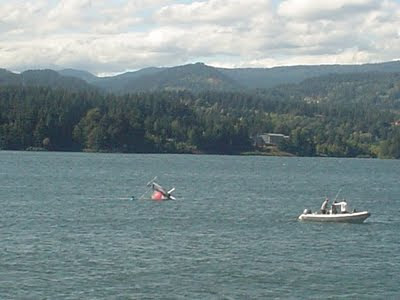 During the break between races 2 and 3 I took the shots below. One of a couple of Aussies and a Kiwi being interviewed, and one of three of the British contingent saluting a fallen comrade (yes, I'm down again with a broken gantry.) 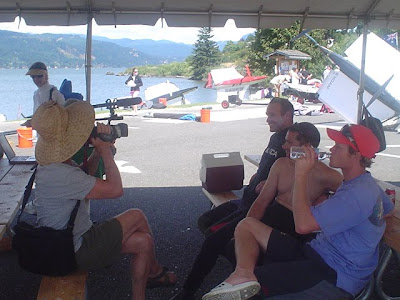 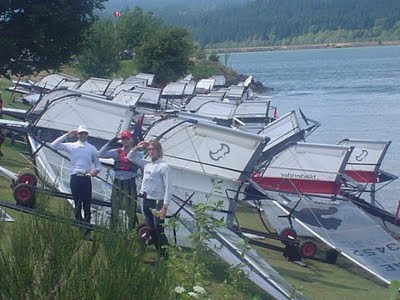 For my gantry failure, parts are on order next day air so I may be able to start repairs tomorrow, with hopefully sailing by Thursday. (Wednesday is a lay-day.) My one start wasn't too bad - weather end, just a few seconds late but with speed. I did cross Brad Funk, so maybe I'm not completely klutzy. My finish, however was 45th, and the breakdown occurred before the second start, so I'm currently ahead of only the three folks that didn't sail today. Visions of Weymouth! At any rate, here’s Toby Keith singing about my sailing ability.

No matter how bad it might seem, remember you may be at the bottom of the results at the worlds

But a lot of us are at work watching in envy, of even just being able to watch it in person.

I have to relate a somewhat funny story. Yesterday during the practice race, I was headed downwind on my first lap and was passed by Bora who was on his second downwind. As he pulled off a gybe at speed with the foils seemingly only inches below the surface, I watched in amazement. I don't know if my jaw dropped, but I was certainly mesmerized, so much that I wasn't paying attention to starboard tackers still heading upwind. As Adam passed he called out "Watch where you're going, Joe. " I apologized profusely, but you're right - it's a privilege to watch these guys in person. Hopefully by Thursday I be back on the water.