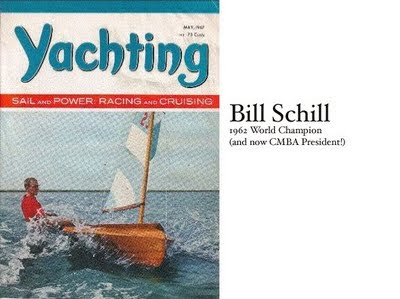 Day Three of the Worlds was scheduled as a lay day, reserved to catch up in the number of races if need be. As it is, we're one race up (having sailed four instead of the planned three on Monday,) so there's no need to use the lay day. It's just as well - a cool rain in the form of a steady drizzle is coming down, making any racing that might have taken place today far less enjoyable. So for me today, it's finish the epoxy work on my gantry, glad that I have a heated hotel room to help things kick.

The spare time gives me an opportunity to contemplate the racing and my participation in it. I suppose I should also talk about the evolution of the class from the prospective of someone who's built moths in three distinct design eras: the "classic" moths of the early to mid-1960s, the first of the "wedge" designs typical of the mid to late 1970s (my hey-day,) and lastly, the modern foilers of today. First the boats: these aren't your father's (or grandfather's) mothboats. For three decades, from the mid '30s to the mid '60s, the design changes were generally gradual - but the resulting boats were all designs that any competent dinghy sailor would feel comfortable in. When revolutionally gimmicks were tried (multihulls and sliding seats to name a couple) they were quickly outlawed. The resulting type-form was (and is, see the Classic Moth Boat Association) an eleven foot development dinghy that is easy to build, cheaper to own, and more responsive to sail than most any other conventional dinghy. I should know - I've built or re-built about eight hulls in the past ten years and presently sail my Mistral design "Try-umph" in Classic moth regattas. The competition is top-flight: one of our active builders/sailors is Jeff Linton, the 2007 US Sailing Rolex YOTY. Below are a couple of shots of me sailing my classic Try-Umph, built in 1997, to the rules of the CMBA, and one of me racing my wife's modified Shelley at last year's CMBA Nationals (I'm in the black and white boat at the weather end.) 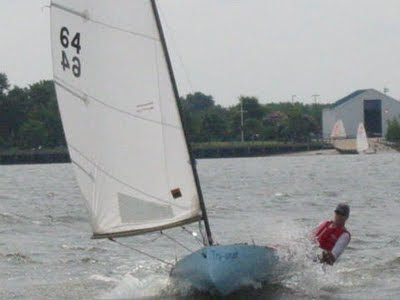 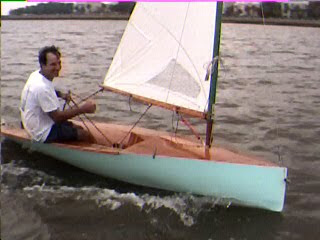 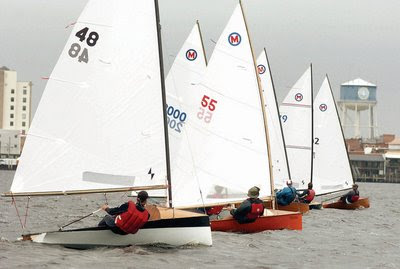 The international moth class changed significantly in the late 1960s & early 1970s with the adoption of the Australian "tall rig." Development underwent a quantum leap as builders and designers adapted to the more powerful rig by increasing beam, narrowing waterlines, and all the while working to minimize weight. I built and campaigned three boats is this era: a Stockholm Sprite with box ply wings (that also sported a double luff sleeve sail, one of the first), a Mistral with tube wings (in which I took 7th place in the 1976 worlds) and a fiberglass Magnum2 that I sailed to 16th place in the 1977 worlds at Hayling Island. The boats were easy to build and fun to sail. I remember with my Sprite "First Try" playing around before the start of multiclass regattas by standing on the wing while planing through the fleet. Good fun! Pictures are hard to come by, but below is a shot of me sailing in 1974. 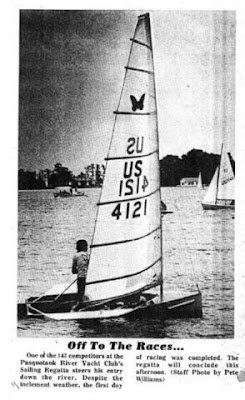 The moth class died off in the US in the late 1970s, so I missed the whole era of the narrow skiff with t-foil rudders. I did have a go at an ultra-narrow boat around 2001 and was turned off by the constant swimming. For a while a couple of us on the east coast experimented with the addition of an asymmetrical spinnaker on a Magnum2 hull, but the result was also less than satisfying. Below are a couple of shots of me sailing that boat, with the same cloth sail that I used back in the 1970s.

In the end, the "US modern moth" experiment didn't pan out. It wasn't until September of 2007 that I had a chance to sail a foiler: Bill Beaver's Hungry Beaver design. I was immediately smitten and decided then and there that I had to build one. You have to remember my history - I had never "bought" a moth before, so the idea, not to mention the price tag of $15K+, of buying a BR was considered, but quickly dismissed. So began my saga of Try-Foil. The boat, with its homemade foils, was completed in the late spring of 2008, sailed enough to get through the initial sail-break-fix-repeat stage (or so I thought,) then packed off to the Weymouth worlds. I should have realized then that something significant was afoot in the class when I was but one of about a half dozen "home builds." The BR factory team support was ever present, and all the top finishers, hell, probably the top 50 finishers, were all sailing production boats.

My result at Weymouth was disappointing to say the least. If the breeze had been no more than 15 knots I probably would have finished all the races, but my overall place of 75/99 may not have been any better. So I came back home, sailed one regatta on the east coast (the AYC HPOD regatta in October) before I blew up my daggerboard. I decided to bite the bullet and buy what I considered to be the biggest component of my slows: the foil. The reception of a new FC gen3 two piece foil didn't result in a final solution; for that I'm still a ways away. But my experiences last week and this have convinced me that class, for better or worse, has changed from what I remembered. If the adoption of the tall rig in the early 70s resulted in a quantum leap for the designers (with home builders still being able to compete with designs a season old,) the universal adoption of foils has been a fundamental shift in type, at least as the home builder is concerned. The forces are now so large and concentrated that except for the cachet one-offs, like Karl and Bruce, or small boutique builders like Cookie, competitive boats need to come from industrial facilities with all the state of the art techniques (huge autoclaves, resin infusion, etc.) An inspection of the M2 shows foils rigidly fitted to the hull - there is not a bit of play in the system. Such tight tolerances are hard to achieve. Amac has given me a few hints and suggestions so when I get home I still have work to do. 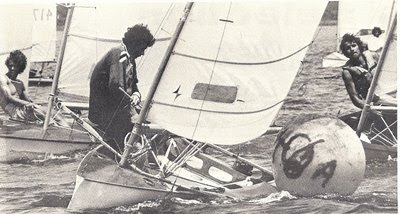 The other significant change to the class is its sailors. This really is "Formula One" on the water with, at least at the World Championship level, professional sailors predominating. I feel like a senior amateur who made his own golf clubs going up against Tiger Woods and the rest of the PGA in the Open tournament. It's a privilege to be here, to start with and to even be lapped by the likes of Nathan, Bora, Arnaud, Si and Rohan (and Scott, and Dalton, and any of the McKees, and...). The pictures of Bill Schill, shown at the top of this post and who won the worlds in '63, and Peter Moor, shown immediately above and who finished 2nd at the Ware River worlds in '76, seem quaint compared to where we are today. Yes, with me and moffing, it's been a long and winding road. Enjoy the Beatles from 1970.

Perhaps you and I can spearhead the movement to split the fleets into gold and silver? Did you read my latest blog mentioning the very same subject?

Perhaps we should have some discussions offline...

PS: No gold and silver before the competition reaches 50 competitors. Than: yes! and use the DN system.

C'mon Joe, what were you expecting!
A competitive boat is a boat that's better than it's meat. I've sailed the sister ships and they fit the bill.
Stop whining and go sailing. Think about us poor bastards who had to stay behind.

Giving you (ore me for that matter) a BR or M2 is like giving truffles to pigs ...

Have fun, be nice to Andy.

A most excellent blog on moth history which I read with pleasure as I head to the Gorge to watch the World Foilers. I am leaving my Classic '68 Cates/Bailey in the garage. Someday there might be a time to race it if others come out on the West Coast.
UP
Count Enrico Alfredo Ferrari