Aftermath and 29ers in the Gorge

Today I sailed my wife's classic moth, Aftermath, up at Ware River. I couldn't justify paying the $40 entry fee for racing in a Portsmouth Handicap start so just knocked around for an hour or so. Sailing in a lowrider after foiling is like going back to the time before you got the addiction. It was a time of ignorance and innocence, but after the experience of foiling, anything else is wanting. I also chatted with Kerry Stokes, an Opti mom who was sitting onshore watching the sailing on the junior course. Her husband is Gordie Stokes, a guy who was racing international moths back in the day (he, too, had competed at the Ware River worlds in 1976,) and is now sailing a 29er with one their sons, Kav. Gordie and Kav are doing the summer sailing excursion bit: last week they were at the 29er Nationals at the Gorge and this week they are up at another regatta in Buzzards Bay. Of course I wanted to know about their Gorge experience, and Kerry reports that it was "honking." Now, what's 'honking' to a sailor from the Chesapeake might just be a typical afternoon breeze to someone from SF Bay, so I'd take the comment with a grain of salt. There's nothing like real numbers to put the strength of breeze where it belongs. Too bad there's not a Windsonic anemometer at Cascade Locks like there was at Portland Harbor. Maybe by next year there will be. Kerry also commented about her husband's wonderful camping experience at the Gorge, punctuated at regular intervals by the passing trains. Whether or not train rumblings at the Gorge will compare with the cow mooings, seagull cawings, and general wind-shaking, tent-rattling we experienced this year at Pebble Bank is yet to be determined. 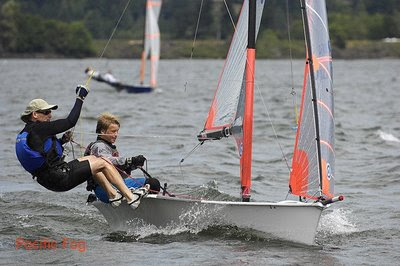 But back to Aftermath. There's an interesting story behind this boat. I got her as part of a deal from George Albaugh back around 2001. I had been racing my classic Mistral for a few years and had built a widened Sprite for Merv Wescoat to the classic restrictions (five foot beam with no wings) the winter of 1997/98. Both boats utilized a roll tank system that is documented here: The Bousquet Roll Tank system on a Skol moth. George wanted me to build a similar deck layout on a glass Shelley that he had and for payment he passed along a second Shelley he had found in a New Jersey garage. I then tore off the old deck (it was pretty rotten), raised the sheer forward and re-decked it with a high foredeck and my roll tanks aft. The black-white demarcation shows the aftermath of the modification: everything white was built by Wm. McCutcheon on the Isle of Wight in the UK in the 1960's and everything black was my addition some thirty odd years later. So why the increase in sheer? The rebuild was for Susan, my wife. She requested a comfortable boat with plenty of head clearance. At the time, the classic moth had a restriction on boom height: no more than 12 inches above the deck. So, to increase the head clearance I simply raised the deck. The increase in sheer was to make the boat drier. The original design by John Shelley (a variation on his I-14 of the same era) had a claim to fame in that it was one of the first designs that could plane to weather in the right hands. The boat had a low deck and I imagine a good bit of spray would come aboard (as evidenced by the two thru-hull bailers in the cockpit floor.) My modifications of increased sheer, highly cambered fordeck and small footwell-type of cockpit allow the boat to stay dry in almost any wind condition. At any rate, Susan never needs a bailer as she enjoys "sailing around the buoys" in the classic fleet.