Following through on a comment Gui made to the US Yahoo! Group listserve - "If you're an average Joe, and you're not planning to put the time in (~1-2 days/week), you simply won't learn how to sail the damn thing." (was he talking about this Joe?) - I went sailing for about three hours today. Breeze was perfect - 8-15 knots. Most of the time I was in Willoughby Bay (flat water with a shifty, puffy breeze) but I did get beyond the Spit and sailed out to the channel. I figured the steadier and stronger 15 knot breeze against the 2 knot ebb tidal current was a good approximation of the Gorge. The added wash from the Labor Day motor boat traffic added to the bumps and thrills. No problems on the reaches but still not getting good wand feedback on the deep downwind angles in big (2-3 foot) waves. In general, though, my straight line technique is getting to the point where the improvements are in small increments. My turns still are rough and I haven't yet pulled off a smooth foiling jibe. I'll keep sailing and hopefully get there eventually. 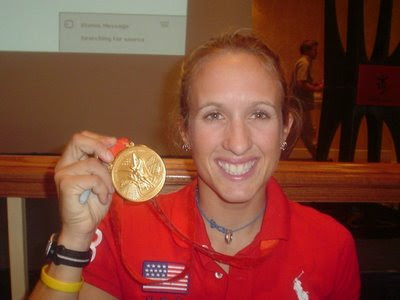 After the sail, Susan and I went back to NYCC for an evening reception honoring gold medal winner Anna Tunnicliff. It was neat meeting Anna and holding the medal (boy, it's heavy - solid gold and white jade - I wonder how eight of them felt around Michael Phelps' neck?) The shinding was nicely done with free food and drink and lots of local folks. Old Dominion University was well represented with, of course, Anna, current sailing coach Mitch Brindley, and former coach Gary Bodie (now the US Sailing Team coach.) I also chatted with another of Anna's coaches, John Bertrand, whom I had first met in 1977 when he was competing at the US Laser Nationals in Fort Lauderdale and I was heading to Hayling Island to compete in the 1977 Moth Worlds. It's amazing how things tend to come full circle.

Chatting with Anna I mentioned moths, and she said that her husband Brad Funk will be sailing at the '09 Gorge worlds on a BR. Anna herself has been thinking of competing, but she said that she needs to stay off the moth because the more she sails it the less likely she'll want to get back on the Radial. Duh! She does plan on sailing for another gold (in the Laser) at Weymouth in 2012. I'm glad she'll benefit from all the slipwork improvements the construction of which we suffered through. From 1977, the year I graduated from ODU, to talking with our gold medal winner tonight who plans on competing in Weymouth in 2012, it was a nice trip down memory lane.
Posted by Joe Bousquet at 8:30 PM