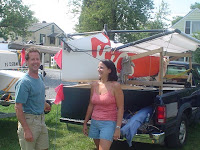 I made the four hour trip up to West River Sailing Club, just south of Annapolis for a little sailing and comraderie with fellow mothies, including Mike and Barbara Parsons. Mike brought both his classic Mistral and his yet to be launched Stevo foiler. The hope was to borrow a rig from Gui and have his initial splash. All told there were five classics and four foilers.

I also brought a classic as well as my foiler, hoping to trick the wind gods into thinking I wanted a light breeze (so that naturally it would blow.) The problem was I rigged up the foiler. I should have rigged the classic and then inevitably we would have had a good foiling wind. As it was, the breeze came in with starts and fits -- big holes and shifts. Occasionally we'd get puffs of around 12 knots but then have them abruptly drop off to less than 5. Lots of diving into the center.

This was the first time the two Hungry Beavers (Bill's and mine) were on the water at the same time. The few instances when we were sailing in the same puff Bill was slightly faster. But the wind was so inconsistent that it really mattered who got the wind and the shift first. No racing for us, just sailing around. The classics did get in a couple of races with Rod and Mike trading firsts. After about an hour Gui arrived and rigged up his Mad Cow variant. He definitely has the boat handling skills over Bill and I as he was pulling off foiling jibes in the marginal conditions. Around 4:00 Gui helped Mike rig up his boat. As the wind started to drop and the tide continued to fall I cashed out and called it a day. Mike, Bill and Gui went back out with the lightning from the thunderstorms on the horizon. I packed up and started the four hour drive back home. No details on Mike's initial sail, but the last I saw he was doing a lot of swimming. Trying a new boat out in breeze less than 5 knots must be frustrating.

Earlier Bill and I were talking about foils. A couple of comments stuck with me: (1) he is sure that surface finish is very important, and (2) he thinks his rudder lifting foil is too thick for the lift we are asking from it, and could prpbably be paired down for less drag. Bill has spent a good bit of time on his main foil (primarily on the surface finish: fairing, reducing flap gap, filling pinholes, painting, etc.) and improved the lift to drag ratio about 15% . I know this is an area where I'm sadly deficient. Well, I've got a year to get my foils in shape. I'm also thinking of spending some big bucks and buy a professionaly made foil set.

Oh yeah, The "HBs" in the post title could refer to Hungry Beavers, but it certainly refers to Home Builds. Of the nine moth boats sailing today there was nary a single production boat -- all home builds. Yeah, we looked like a bunch of ragamuffins, but we had fun!
Posted by Joe Bousquet at 10:40 PM