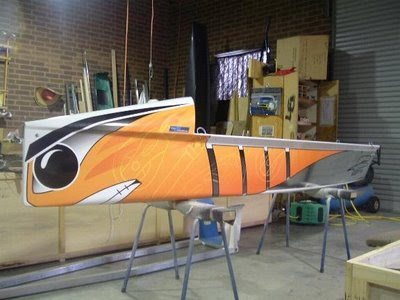 So Si Payne is coming to the Gorge to compete in the US Nationals, and will be sailing a new Prowler courtesy of Tom Driscoll. As a senior class member and former (2006) world champ Si's presence certainly adds a cache to the fleet. His skill in the light to moderate stuff is evident in this video

(what, you can't foil standing up?) and after his showing at Weymouth he claims to have been working on his skills at the upper wind range. He certainly is the presumptive favorite to win the master's award, and I think he will end up in the top three overall. So yes, Si's performance will be a good benchmark for the state of west coast mothing.

One note, though. Given the approximate 7% hispanic population of the Portland area there are about 35,000 people within 50 miles of the venue that would think I've added one letter and left off two diacritical marks in the title of this blog entry. Yes, siree.