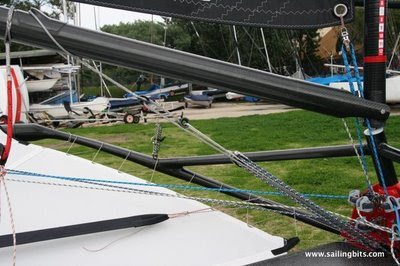 I just purchased the hi-tech vang strops #1 and #2 that include the SRS round thimbles from Sailingbits. The web price was AUD114.30 and according to the Convert me.com website the bits will cost me about US$75. So the weak Australian dollar allows me to get some nice pieces for a smaller cost. Unfortunately, the foil purchase won't go the same route. Amac decided to re-quote the foils from AU$1980 to US$1986 since his cost base is primarily based in our currency. I will still get my new foils (hopefully in about three months) but won't benefit from the currency fluctuation.

The boat has been broken down for the season. I'll be reworking the wand system and will need to build a new cassette for the new board. I also hope to layup another rudder and aft foil before spring. Until then I'll be paying off debts and hopefully saving enough for the trip to Oregon in August. Let's see....Mapquest say it's about a round trip distance of about 5960 miles (9600 km) and with my gas mileage of about 20mpg towing a trailer and gas costing, who knows, maybe $3/gal, the trip will cost about $1000 in fuel alone. Dirt cheap compared to air freight!
Posted by Joe Bousquet at 11:15 AM