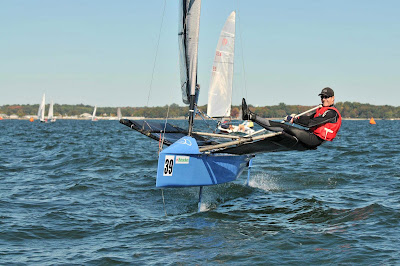 Yesterday in the mail I got the picture cd of the racing at the AYC HPDO regatta. Consistent foiling was really only possible on the first day before the warning, so when I saw the guy in the inflatable with the long lens camera I made a mad dash toward him for a "hot dog" shot. Let's see.... hike out with only one foot under the strap. Whoops! the other foot slips out. Yeah, Peter doesn't have the only boat that can foil by itself... 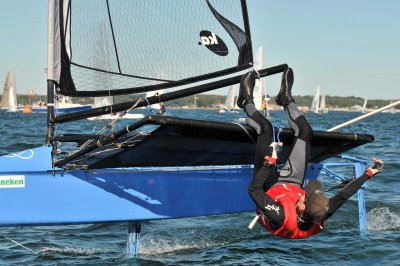 On Sunday the breeze was so light that I was in low-rider mode only. With the cable disconnected and the wand raised up I felt I was back in the seventies working my plywood boat upwind. Lots of bow-down attitude to keep the stern (and now, gantry) from dragging. My speed made good upwind was as high as anyone else's, except for Chris who just managed to just beat me to the weather mark by lots of pumping and close reaching to get up on the foils. 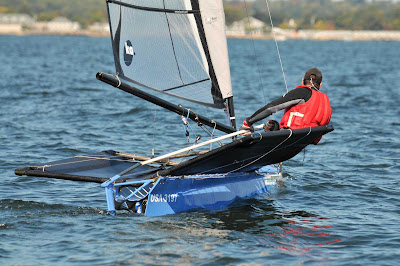 Photos courtesy of “PhotoBoat.com”.
Posted by Joe Bousquet at 1:40 PM

Joe, Too much bow down in light air puts the foil in negative AOA and that is heaps more drag than transom or gantry drag. Better to sail with foil at slight +ve AOA which is minimal drag.
Phil S

Phil: Thanks for the thoughts. I agree about "too much." But what is "too much?" Here's what I was thinking: with the boat level, and the wand cable disconnected so that the mainfoil flap can find its minimum resistance position (and it readily does, flopping up and down as the boat moves through the swells) wouldn't a zero AoA be the minimum resistance position? And if the overall AoA of the mainfoil is slightly positive (say 2 degrees) then the bow would need to drop to zero out the mainfoil. A little trig shows the bow down by 2 inches will result in a decrease in AoA of 2 degrees (over a 60 inch length.) I suspect, anything more than 2 inches would result in a negative AoA and start to build the drag back up. In displacement mode I would bet that the bow knuckle would be underwater a couple of inches in level trim, hence my dropping the bow down even more. I do know I was outpointing and moving faster than Chris in a BR, but it might have been the sail.

More boat-to-boat testing is required, I suspect. But who wants to sail in the light stuff?

Joe: the answer is totally dependent upon foil section. The zero lift AOA for your foil is negative five degrees, so you can submerge your entire stem before worrying about what Phil is referring to, esp if you have it mounted a degree or two positive to begin with. HTH.

Thanks, Karl. I suspected as much. On the Hungrry Beaver in 4 knots of breeze upwind, I didn't see significant slowing even when the flare was at the waterline. Again, the cable was disconnected and the wand pulled clear of the water. My forward, bow down attitude also brought the luff more vertical. It was a little silly watching the Contenders drift up wind with the mast raked 20 degrees aft.