From half-way around the world

The bits came Monday from John Harris. Not bad - only eight days from when he dropped them in the post in Sydney until they arrived at my front door in Norfolk, halfway around the world. I've yet to weigh the rings but I suspect they'll be probably one tenth the weight of the blocks they'll replace. Does anyone want to buy a couple of Ronstan high load blocks (pictured below)? 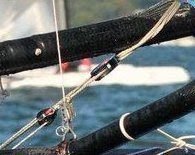 Oh yeah, thanks to the couple of dozen folks who have taken the poll. I'll wait until the weekend for as many mothies as possible to weigh in before I put in my two cents worth.