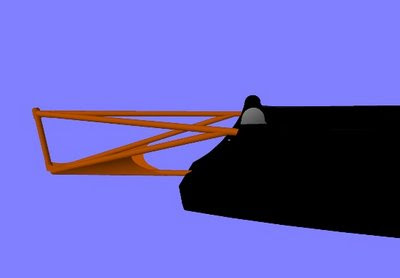 Wow! So according to the just released website, Si will sail the first boat in January at the Bloody Mary (heat up the hot toddy!) and then Amac and Si will compete in the Australian Nationals a couple of weeks later. So it seems that production must be well under way. Additional boats will be bought for the 2009 season by noted folks (Arnaud Psarofaghis and Ossie Stewart.) I hope this means my new foils are either in the process of being built or at least in the production queue. If great performance gains are to be made my bet is that they will come from the foils and rig and not so much from the hull, regardless of how sexy it looks.

The forward canted rudder seems intriguing. For next season I may go with two different rudder set-ups. One would be my existing rudder and gantry. A second could be a new gantry and rudder to mimic the Mach 2's angle. In addition to the modified gantry such an addition would require a new strut and lifting foil and a new rudder box and tiller, so the material costs aren't insignificant (at least $400.) We'll have to see...

Oh yeah, I did get a mention from Andrew Brown on my standing in the blog competition. Perhaps he saved his last comment for the best???
Posted by Joe Bousquet at 10:38 AM

maybe maybe... You also made the request

Yeah, yeah....so a little self promotion is bad?